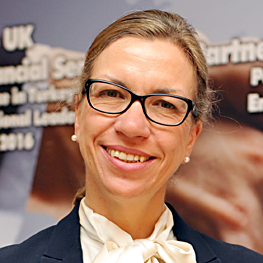 Stella Cox has worked within the Islamic financial marketplace for more than three decades.  Previously she was a Director of merchant bank, Kleinwort Benson Limited, where her team managed Sharia’a compliant assets aggregating over US$2bn. Whilst with the Bank, Stella was involved in structuring The Islamic Fund, the first Sharia’a-compliant global equity product, launched in 1986.

Since 1998, Stella has been Managing Director of DDCAP Group, which is a leading provider of asset facilitation services and related technology solutions to Islamic financial market institutions. DDCAP has invested, for its own account, in a number of Islamic financial services initiatives.

From 2007-2009 Stella served as an Independent Non-Executive Director of Gatehouse Bank, a UK Islamic investment Bank.  In 2008, Stella was awarded for ‘Outstanding Contribution to Islamic Finance in the UK’ at the IREF Summit.

On 13th March 2013, the UK Government launched the first Islamic Finance Task Force.  The ministerial led Task Force was established to refocus on Islamic finance and the UK proposition.  Stella was one of a small group of non-ministerial industry experts within the Task Force and acted as practitioner lead for the regulatory work stream.  With support from the Task Force, the UK Government announced plans to launch an inaugural sovereign sukuk at the World Islamic Economic Forum (WIEF) in October 2013 in London, with the successful issuance following in June 2014.

In 2014, Stella was appointed Chair of the Islamic Finance Market Advisory Group formed by TheCityUK, the financial services professional body that champions UK-based financial and related professional services. It is a membership body, lobbying on the industry’s behalf, producing evidence of its importance to the wider national economy.

Stella was appointed a Commander of the Order of the British Empire (CBE) in the Queen’s Birthday Honours List that was announced on 10th June 2016. Stella was honoured for her services to the Economy and, specifically, as a Champion for the Development of Islamic Finance in the UK.‎